If I would’ve done a video on this post, it would’ve been called The Cursing Chef.

It wouldn’t have been appropriate for children.

Over the last few weeks, I heard from a few different sources that there is a new way to cook eggs – a way that produces perfect eggs every single time.  This was very intriguing to me so I thought I would give it a shot.

Last week, I was listening to one of my favorite podcasts (The Splendid Table) and the host interviewed a chef who said he has perfected the egg.  He even had a nifty chart to show off his tests.

Here was the basics of his method:

1) Put eggs in an immersion circulator at a very specific temperature depending on what sort of egg you want.  Based on his chart and the interview, the perfect soft-boiled egg would be at a 63 degree Celsius temperature, or roughly 145.5 degrees Fahrenheit.

2) Cook the eggs at that temperature for one hour.

I (and most home cooks) probably do not have access to a $400-$500 immersion circulator that can hold water at a specific temperature to a tenth of a degree accuracy.

So the host of The Splendid Table speculated,  and I was thinking the same thing, that you could probably reproduce the results using a huge pot of water and a really good thermometer.  So I figured I would give it a shot.

I set up my largest stockpot filled with two gallons of water and set in six eggs.  I set the pot over high heat to start heating up.  When the temperature hit 146 degrees, I started the timer for one hour.

My thermometer also has an alarm which I used.  Basically, I would vary the alarm to be either 145 or 147, and either have the heat OFF or on very LOW on the pot.

Doing this, I kept the temperature of the water in the pot between a two degree range (145-147) for one hour.

It was actually pretty easy once I got the hang of it. 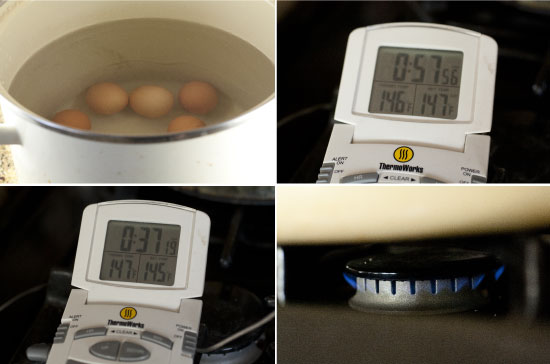 I had very high hopes for this method.

With expectations flying in the Stratosphere, I cracked into my first egg.

The next ten minutes or so involved lots of cursing and flipping off inanimate things. 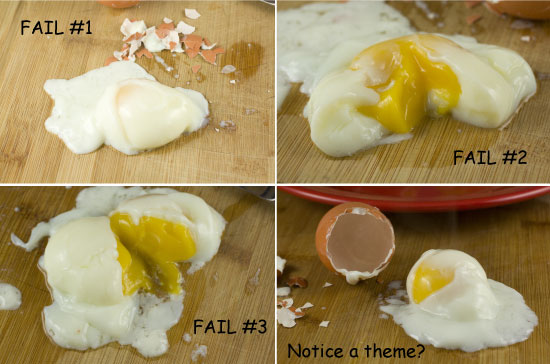 In every case, the yolks were too solid for my liking and the egg whites were too liquid.  They weren’t set at all.  None of the six eggs turned out like I was hoping.

So what went wrong?

Here are the only three scenarios:

1) The method doesn’t work.  I don’t believe this is true.  Dave Arnold, the guy created the method, is a great chef and I think it probably works as advertised.

2) Eggs are finicky.  A two degree temperature range is too much variation to get a good product.  If this is true you really do need to buy an expensive piece of equipment if you want to do this.

3) It did work. There is a note on the chart for the egg picture right before the one I was shooting for that mentions that you might need to dunk the eggs in simmering water to set the whites.  My problem with this is A) it’s an extra step that I didn’t want to do and B) it would make the yolks more firm and they were already too firm in my opinion.

I think scenario two is the most realistic conclusion.

Here’s the thing about this long-cooking method:  I hate it.

Even if it worked, I’m not sure that it’s worth it.  Why?  Because I can perfectly poach an egg 23 times out of 24 in about three minutes.  I can do it without any fancy equipment.  It always works and always produces tasty, perfect eggs.

I will go so far as to say that there is no reason why any home chef should try the immersion method to simply cook a soft-boiled egg.  It will suck two hours of your life and you’ll probably mess it up.

How to Poach an Egg

After all of this, I thought it would be worth it to provide a quick walkthrough on how I poach eggs.

First, I get a medium-large pot of water and add in about 1/2 cup of vinegar for every gallon of water.  You can use just normal distilled vinegar or white wine vinegar.  The vinegar will help the egg whites coagulate so they don’t break up in the water.

If you are cocky, you can crack the eggs directly into the simmering (not boiling) water.  I like to pre-crack my eggs into bowls just to make sure there are no shells and also to make sure the yolks aren’t broken.

Again, your water shouldn’t be boiling or it will break up the eggs.  Just a light simmer will do the trick.

Then give the water a quick stir to create a small whirlpool.  This will help the egg stick together.

Then just carefully slide the egg into the pot.

If it’s your first time poaching, start with one or two eggs.  Once you get the hang of it, you can do more.  I’ve successfully poached six at a time in the pot in these pictures.

Set a timer for 2.5 minutes.  That’s all it takes for a poached egg with a runny yolk.  If you want a slightly firmer yolk, add on another 30 seconds or a minute.

After the cooking time, use a slotted spoon to carefully scoop one of the eggs out of the water.

You can poke it gently to make sure it is done.  You’ll be able to easily feel if the whites are set and the yolk is still soft.  If the whites are still liquidy, then it needs another few seconds cooking.

When the eggs are done, set them on a paper towel to drain off some of the water!

I cut into one of my three just so you could see the perfectness of this.

Here’s the same plate of food as is the first shot with my poached eggs.

These were perfect and took me ten minutes to make – start to finish.

I’m all for food experiments and coming up with new ways to do things, but this new method of cooking eggs isn’t right for 99% of home cooks.

If it ain’t broke, don’t fix it.  And the poached egg definitely ain’t broke!

Learn how to poach eggs and you’ll be all set.