A few months ago I was talking cooking and food with one of Betsy’s relatives and the subject switched to fried chicken (like ya do). I told her about my somewhat annual Fried chicken and waffle parties. She told me about what she considered to be the end-all be-all of fried chicken: Thomas Keller’s Ad Hoc Fried Chicken.

I penciled that in on my ever-expanding brain list of recipes to try, but then kind of just forgot about it.

But, eventually, fried chicken is just one of those things that you crave, and so I looked up the recipe. I thought two things upon reading it: First, it had to be a mistake. Second, it’s a lot of work for fried chicken.

There was really only one way to test this though and that was to make a batch. The original recipe is written for frying whole chickens, but I was really in need of a kid-friendly chicken nugget version so I adapted the version to work for that. Turns out I made some damn classy chicken strips and chicken nuggets out of this recipe and going in my permanent recipe locker.

If you’re a fried chicken fan, these ad hoc chicken nuggets are an absolute must.

The famous Thomas Keller fried chicken recipe adapted for chicken nuggets. A bit of work, but worth every minute!

1) For brine, combine ingredients in a large pot and bring to a simmer to dissolve salt. Start bring with 1/2 gallon of water.

2) When brine is ready, remove it from the heat and add enough ice to bring the liquid to a full gallon. This will cool the brine as well.

3) Add chicken breasts to the brine and let brine, whole, for 4-5 hours.

5) Combine dry ingredients for breading mix in a large bowl. Then divide the breading between two bowls. Add buttermilk to a third bowl and season with a little salt and pepper.

6) Pull chicken out of brine and pat dry with paper towels. Slice into thin strips or nuggets.

7) Toss chicken with dry breading mix, then dip in buttermilk, then back in breading mix.

8) Fry chicken in batches for 7-8 minutes until it’s golden brown and cooked through. Test a piece to ensure it’s done.

9) Remove chicken from the fryer and let drain on a few paper towels. Serve while warm!

This recipe starts like so many good fried chicken recipes – with a brine. I’ve tried out many brines over the years and this one was definitely different. It was LOADED with lemon. The original recipe had basically a whole lemon tree in the brine.

Because I was working with chicken breasts and not whole chickens, I cut back on the brine ingredients and also the salt in the brine because I didn’t need as much penetrating flavor.

Still though… plenty of flavor in this sucker!

Bring the brine ingredients to a simmer in a large pot until the salt is dissolved and the flavors are mingling nicely.

I recommend starting the brine with half of the liquid in the recipe and then adding ice at the end to top off the liquid. This will chill your brine so you don’t have to wait for it to cool before using it.

Once the brine is chilled, add your chicken breasts. I used about three pounds of chicken, but I think you could use up to six if you wanted to brine a bunch of chicken.

The brining time here is a bit different than the original recipe as well. If you’re brining whole birds, you can just do them overnight. Whatever.

You have to be a bit more careful with chicken breasts though. At a minimum, I’d say brine them for four hours, but no longer than eight hours. So you could brine them in the morning if you were cooking them that night, but I wouldn’t start them the night before if you are planning on cooking them the next night. That’ll be too much time and they will almost cure.

Once you are ready to fry, you’ll need a breading mix. This version is fairly standard. Any breading mix you use for fried chicken should have a lot of spices and this one definitely does.

Mix up the dry stuff and spices and then divide it between two bowls.

Cut the chicken into whatever shape you want (I did some strips and some smaller nuggets).

Then dunk them in the breading, then into a bowl of buttermilk.

Then back in the second bowl of breading mix. This will create a super nice crust of crunchy deliciousness on the chicken.

Now fry time! Fry the chicken at 350 degrees for about 7-8 minutes. They should be golden brown and I usually test a larger piece just to make sure it’s cooked through.

Once the chicken is fried let it drain on a few paper towels. Looking good, right?

I can’t preach enough about this recipe. The chicken is super moist and very flavorful. You really taste the lemon and spices. It’s out of control.

If you are a fried chicken fan, it doesn’t get much better than these Ad Hoc Chicken Nuggets. 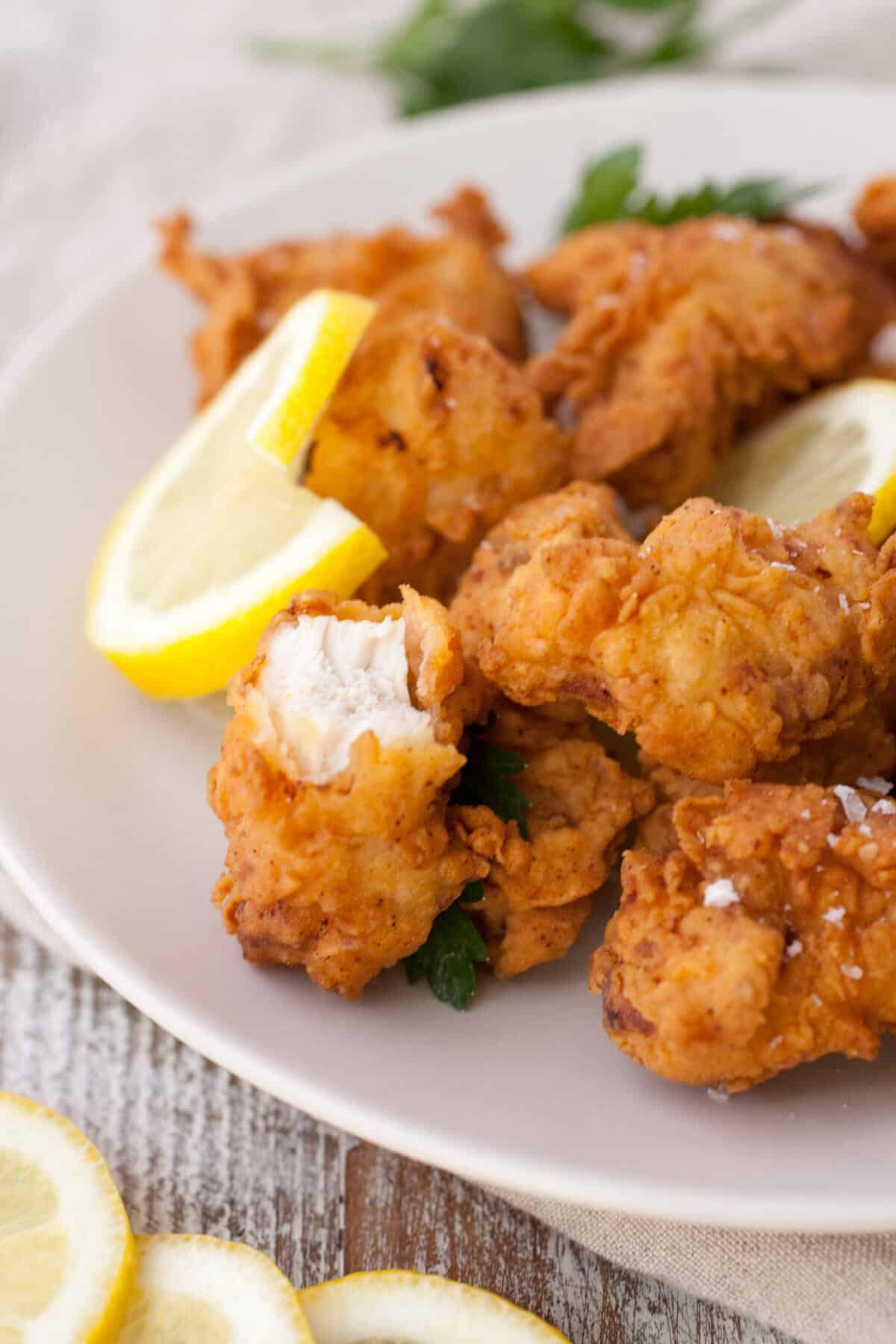