Well, it happened. I finally convinced a pretty lady that it was a good idea to marry me. I got some requests to post photos from the wedding and even though my brain is still kinda fried from a week of busy planning and heavy drinking, I’m happy to oblige.

It should go without saying that this was a very special day for both me and Betsy. We had a fantastic day out on a farm just outside of Nashville, Tennessee. The weather was perfect. The food was delicious. The music was outstanding (as was the dancing).

Here’s a few of my favorites so far in the photos I’ve sifted through (which is a fraction of them honestly).

Betsy and I tried to keep this day pretty low key, but her friends did throw here a little party to celebrate prior to the ceremony. 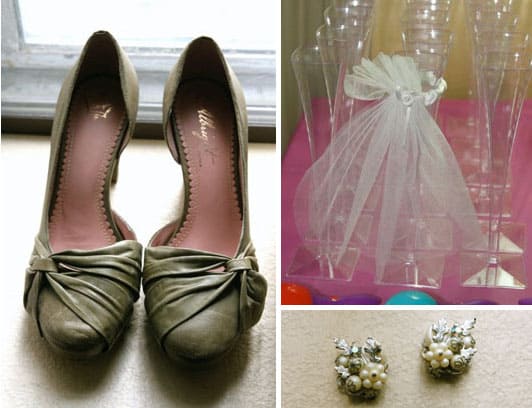 She got ready and drank champagne with her girl friends and had a grand time. Here’s the polished bride having fun.

And yes, since the event was so casual, she didn’t want to do a normal wedding dress. She looked beautiful though. 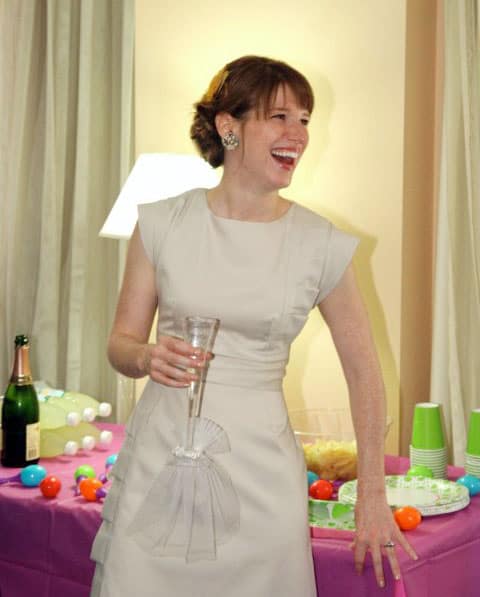 Meanwhile, out at the farm I was trying to A) remember my vows (we wrote them ourselves) and B) get everyone gathered for the ceremony. 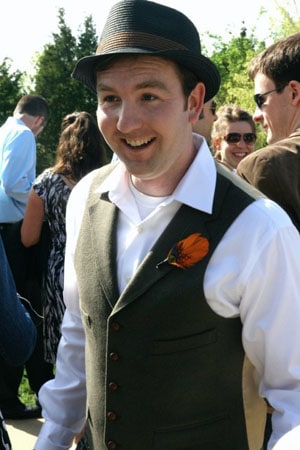 Oh. And I dropped the ring. It happens. 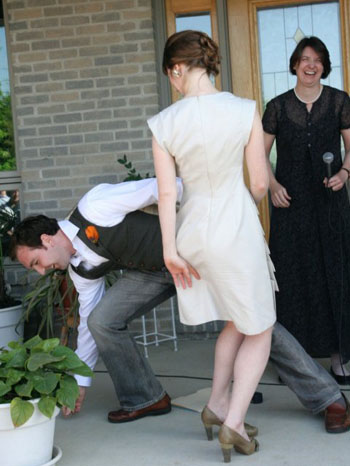 Our ceremony clocked in at almost exactly 8 minutes (even with the ring fumble), which was definitely short and sweet!

Then there was the obligatory cheering! 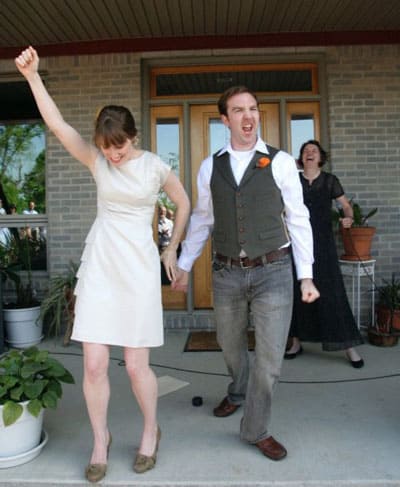 Basically, after the ceremony was over, Betsy and I planned out a 6 or 7 hour party with games, dancing, eating and drinking. At one point, one of the attendees said to me, “Nick, don’t take this wrong way, but I don’t even feel like I’m at a wedding.” And that’s what we wanted honestly, so it was a compliment.

We did have a first dance though! We danced to Ray Charles’s Come Rain or Come Shine. 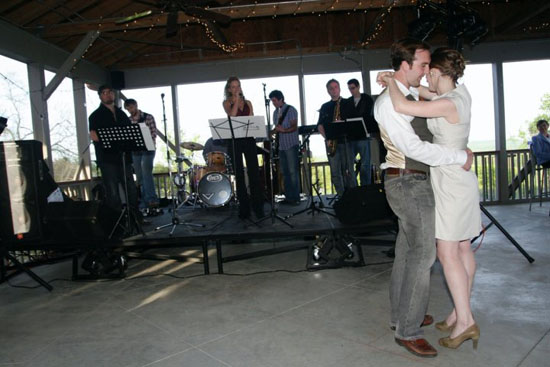 And our parents (and Betsy’s brother) gave some really outstanding speeches. They were actually hysterical. 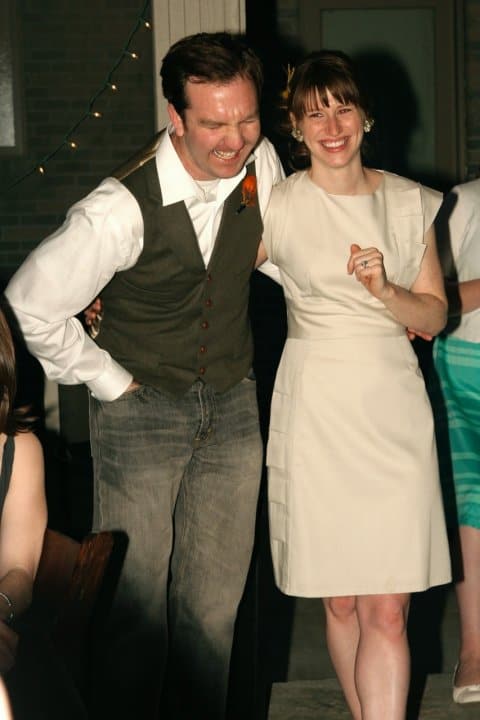 We thought it’d be fun to set up a bunch of lawn games that people could play while they were drinking or taking a break from the dance floor. There was that bags game (which I customized with a big BRIDE and GROOM lettering), ping pong, Foosball, and some other random stuff.

The games were kind of a hit I think. 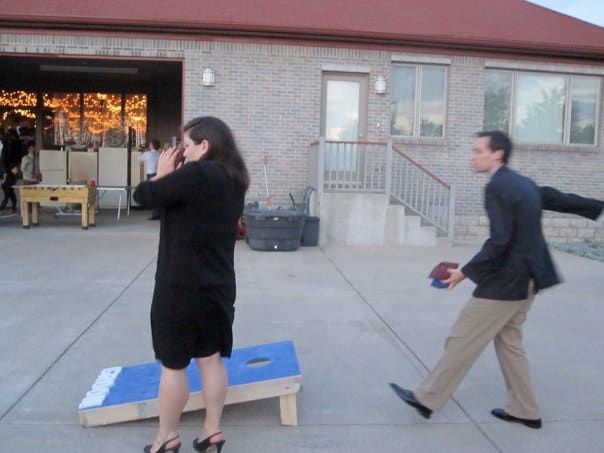 One of the things Betsy and I really wanted to spend our money on (besides food as you can imagine) was a really fun band. We succeeded I think. This was us cutting a rug to Dixieland Delight, a Tennessee classic. 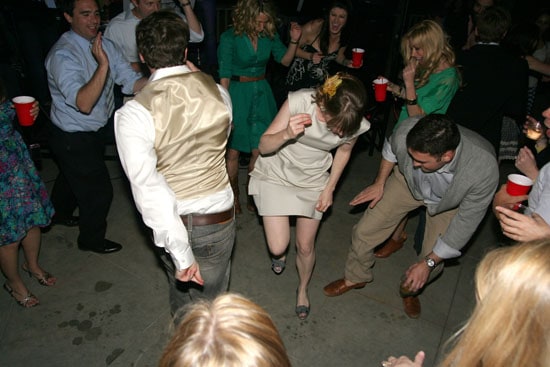 We were also subjected to the chair thing even though we aren’t Jewish (a number of my friends are). It was super-fun and extremely scary. 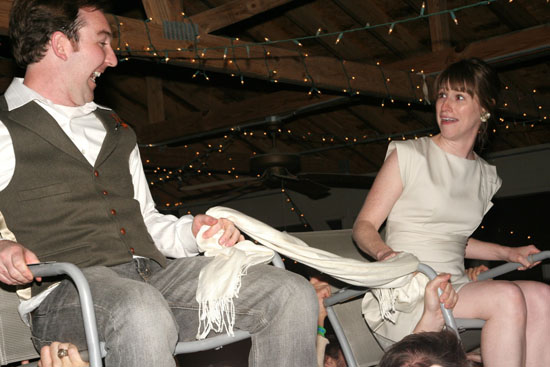 The food at our wedding was very delicious. I wish I could share it with you via recipe, but the Chef wouldn’t tell me too many secrets (although I did get one or two out of him.) For example, he wouldn’t tell me how he carved any of this stuff! 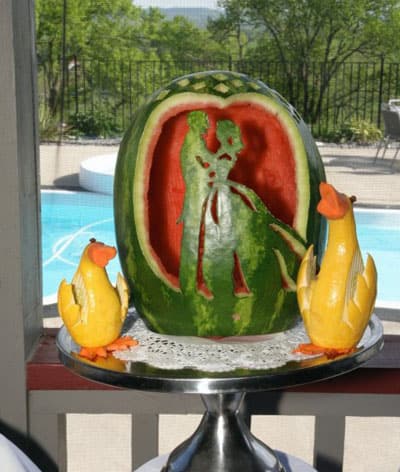 Since we were in the South it seemed appropriate to do kind of a meat and three thing. We were lucky enough to get our hands on some fantastic organic chickens and two locally farmed pigs which were the center of the meal. 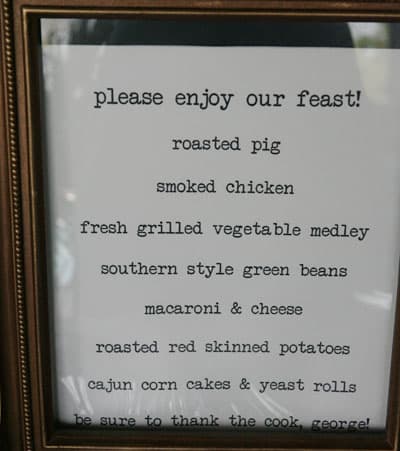 I was very impressed with the food because I know how hard it can be to cook for a lot of people. This was one of the two pigs that the chef smoked for us. So good. 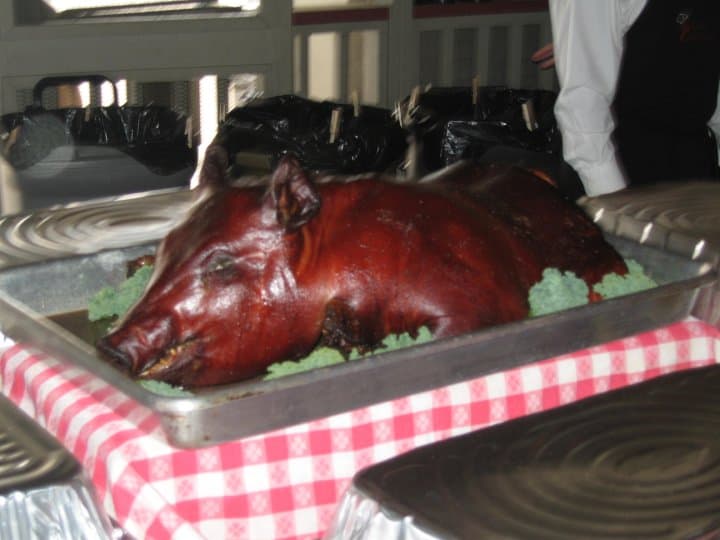 One of the reasons why I think the food was pretty good is that the chef had this enormous grill that he parked right next to the festivities. Everything was cooked right on site and then immediately served up. It made everything really fresh and super-delicious. The smoked chicken was especially good. (Neither of the two men pictured are the actual chef of the day. Although one of them is my father.) 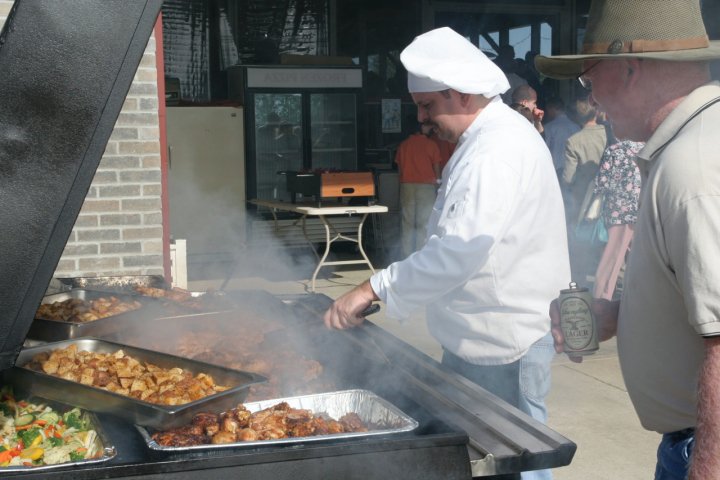 Want to know how good the chicken was?? This photo wasn’t staged. 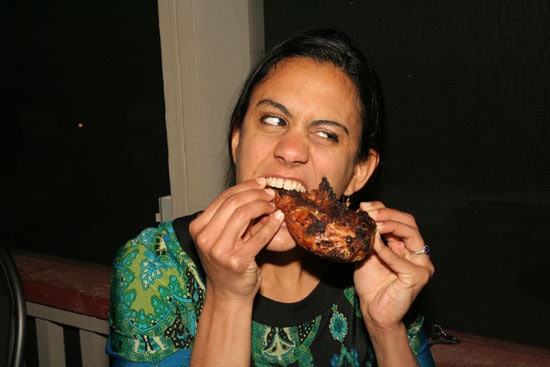 For dessert, we didn’t want a traditional wedding cake really so we lit up the fire pit outside and had S’mores! 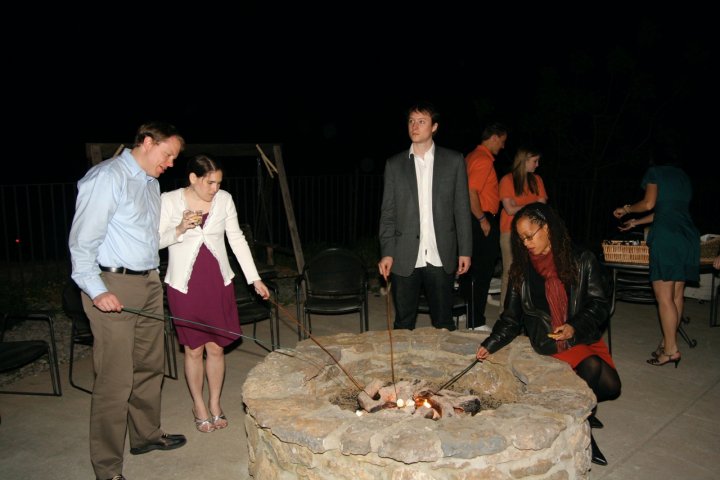 And we had a few relatives and friends help out with a big dessert table. Betsy’s mom, Mary, made magic cookie bars and angel food cake. Betsy’s sister, Anne, made brickle. And, Dorothy, a family friend helped out with a bunch of cookies. George our caterer made the pies and I made those red velvet cupcakes you see there (recipe tomorrow). 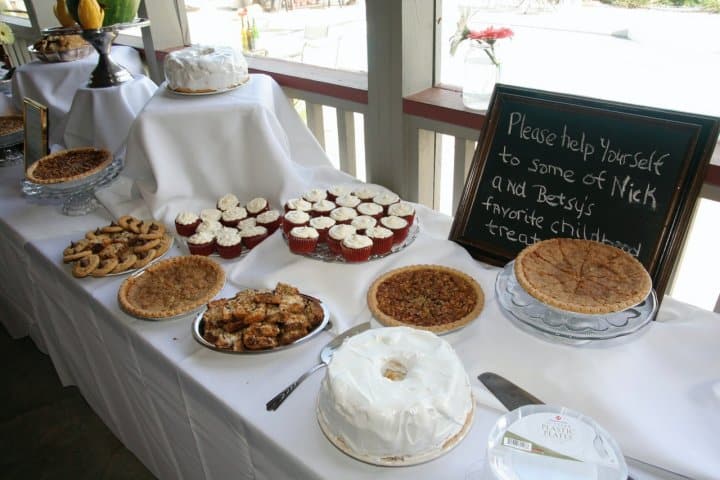 The venue and weather really made this whole day very amazing. It was such a gorgeous day. Here’s the patio outside during the beginning of the celebration. 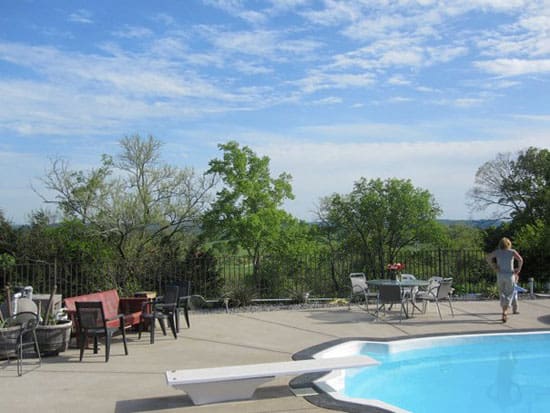 And here’s one of my absolutely favorite shots which I swear isn’t photoshopped at all. It was really that beautiful. 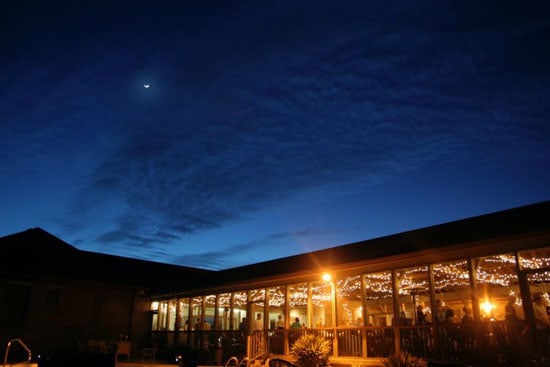 We tried to keep our staged shots to a minimum but we took a few that turned out pretty good.

So anyway, that was the day! I think it would’ve been a fantastic day for me no matter what but it was exceptional because we had a LOT of very talented people help us. I don’t think that any of the vendors we used knew that I run a food blog, but I give my absolutely highest recommendation to any of the following vendors in the Nashville area which basically made our wedding go off without a hitch.

Venue – Tap Root Farm (Thanks Susan). It was a wonderful venue and the staff there made everything fantastic.
Food – Awesome Catering by George. George is a fantastic cook and also a good entertainer. He cares a lot about the food he serves and it shows. He also owns the City Cafe East in Nashville.
Music – Live Revival. Amazing band. Amazing singers. I have a lot of favorite parts about the band, but maybe my favorite was when a friend requested “Rocky Top” because it’s one of Betsy’s favorite songs and they looked it up on an iPhone and nailed it first try.
Photography – One of our mutual friends, Yasmin, offered to take our photos and we happily accepted. She has a great eye for catching emotions. She took almost all of the above photos.

So there you have it! Our wedding day! We really had a blast.

Check back tomorrow for that red velvet recipe!