A Review of Google Recipe Search

About a month ago, Google launched a new tool called “Recipe Search.” It took me a while to figure out exactly what the tool was doing, but now that I have a somewhat firm grasp on it, I thought I’d write up a quick review of the tool and give some thoughts on what it means for finding recipes on the Internet.

Let me start by saying that I use a lot of Google tools. I started using Gmail in 2005 which was during the initial Beta version of the product. I’m a huge fan of Google Calendar and Docs and also use a ton of Google products to track traffic and stats here on Macheesmo.

In short, I’m a Google fan.

And that’s why it pains me to say this, but Google Recipe Search is really bad.

How Google Recipe Search (GRS) Works. The tools is simple enough to use. When you do a basic search on Google for something that it thinks might be a recipe, it gives you the option on the left to filter only recipes. It then gives you some other options to filter recipes based on prep time, ingredients, and even calorie count.

In short, the goal is that you should be able to search for a recipe and, using the filters, find the perfect recipe for you.

How Google Does this. This seems like a crazy tool when you think about it, but it’s actually fairly straightforward for Google to do. They are relying on a specific kind of code call “Snippets” to pull the appropriate filter information into the Recipe Search.

Straightforward enough, but Google can’t categorize this text. For google to categorize it, it needs to be coded in a specific fashion. So for this recipe to be filterable by Google, it would need to be formatted more like this:

If you’re a techie and want to see the full write-up on how to code stuff in rich snippet format, you can check it out here.

So just by making this small change, Google will now be able to read that your recipe can be made in 30 minutes and it’ll show up in the filter accordingly.

I’d guess it would take me roughly half an hour per recipe to recode my recipes in this format. Just to put that in perspective, that means that if I were to work 8 hours a day doing nothing but recoding recipes and I worked 7 days a week, it would take me about a month and a half to finish.

In other words, not gonna freakin’ happen. Especially considering that I could finish doing this and Google could change their algorithm on a whim and I’d have to redo all my hard work.

Let’s take a look at a quick example.

If you google “Baked Oatmeal”, my recipe normally pops up around 3rd on the results list out of about a million results. Not shabby! It also happens to be a kick ass recipe.

Now, if I click the “Recipes” filter on the left, my recipe goes away, along with about 900,000 other results! 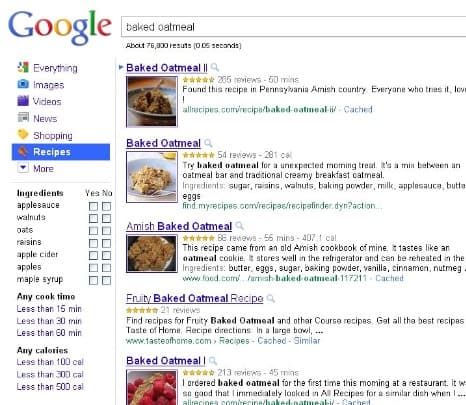 Even though I haven’t clicked on any recipe filters yet (which would rely on those snippets), Google has already eliminated my recipe from the results. In other words, because my post doesn’t contain any code snippets at all, Google thinks it isn’t even a recipe!

Instead, what you’ll find in the “Recipes” section is almost exclusively recipes from large recipe sites. I’m not saying that these recipes are necessarily bad, but I definitely don’t think they are better than mine. Or Joy’s. Or Kath’s. All of which have been removed from the results.

You’ve probably heard the expression, “Quality over quantity.” I’d rather have one really good baked oatmeal recipe than one million crappy ones. So, if this filter is doing it’s job, the 70,000 recipes that are left should really be the cream of the crop and I should be able to filter down and find the perfect recipe for me.

In practice, I’ve found that the best recipes are already eliminated once you click the recipe filter. Since Google uses a chainsaw instead of a razor when filtering recipes, they are not only decreasing quantity, but also decreasing quality. And that definitely isn’t a good thing.

Website owners are savvy individuals. When it became apparent that you could stick in some code in your recipe that would immediately jump your recipe to the top, large sites fell over themselves to get the work done. Unfortunately, not all of their work is being done honestly.

For example, do you think it’s at all possible to make a beef stew in 15 minutes? Well, trust me. It’s not.

But if you search for “beef stew” and filter down to less than 15 minutes, you’ll find this gem. A slow cooker beef stew recipe that apparently only takes 10 minutes.

Of course, once you click on it, you realize that it actually takes much longer than that. But it’s been coded in a way to show up when you filter for under 15 minute dishes. Clever guys.

The calorie filters are even worse. Going back to baked oatmeal, this recipe claims that a serving is just under 100 calories (how convenient). Of course, if you look at the serving size it’s basically a few Tablespoons of oatmeal. Who eats a few tablespoons of oatmeal? Get bent.

Now, of course, not all of the recipes that show up in the filter are using “creative coding” to get their recipes to show up. There are some very ambitious sites like Simply Recipes who are doing it the right way. But again, for smaller sites, it’s just not realistic.

It seems like Google has decided to try to categorize all the recipes on the Internet using a very strict formula. Unfortunately, because there’s no review process, anybody can use their “formula” to jump to the top of the search. Meanwhile, individuals who have spent years developing recipes that they really care about are left in the dust.

How To Find Recipes

So, it shouldn’t be surprising that I’d recommend you avoid Google Recipe Search. Maybe if enough people stay away from it and they get enough negative feedback, Google will eventually change it or just get rid of it.

I’d suggest that when you’re looking for a recipe on the Internet, try using one of the below resources:

Normal Google Search. If you just search for the recipe normally on Google, you get pretty robust results still. There are quality blogs mixed in with the large recipe sites and the normal google algorithms apply. Just don’t click the recipe filter and you’re good to go.

Food Blog Search. I use this site all the time to find recipes. It includes a reviewed list of around 3,000 food blogs that all provide very quality recipes. It’s a great resource.

Twitter. Sometimes I search for recipes on twitter and find pretty good stuff. These are recipes that are being talked about so they probably are pretty legit.

A few other bloggers have written about this tool also. Check out:

– Elise from Simply Recipes writes a thorough article on how the GRS works and whether it’s worth it or not.

Have any of you tried this tool? What are your thoughts?