UPDATE: This book exists now! Check out more info on it and buy it today!

Many of you probably know that I self-published my first full cookbook called Cornerstone Cooking through Amazon last March.

The book was only available on Amazon and was about $21. That was a bit more expensive than I would’ve liked, but I couldn’t really get the cost lower than that.

If you happen to search for the book now on Amazon, you’ll see that $21 was a steal compared to what it is now!

Obviously, I do not want you to pay almost $2,000 for a cookbook that I wrote!

The reason the price shot up is because I actually discontinued the book and I guess that somehow makes it a collector’s item.

A New(ish) Book is Born

After a few months of Cornerstone Cooking sales and reviews, my agent worked out a deal with a publisher (Lyons Press) to help me re-release the book in a better format. In short, I liked the experiment of self-publishing, but I found that it wasn’t right for me or for this project so I was happy to find a real publisher to help me get my vision straight.

The new version of the book will include some nifty stuff like:

I decided to discontinue the current version of the book because I felt bad selling a book that I knew would be re-released in the future, even if the new version will be drastically different. 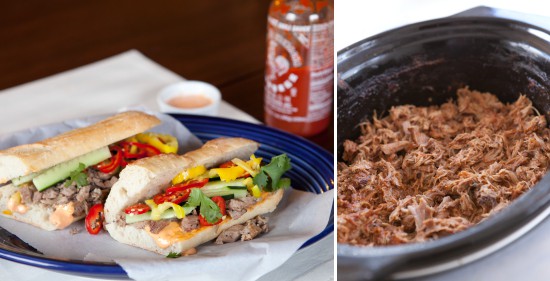 If you are a regular Macheesmo reader, you probably know that I’m a bit obsessive about my posting schedule. Basically, I try to update this site 6 days a week which is pretty ambitious for one dude.

I think I’m going to have to cut back on this for the next few months to prioritize the book. I want it to be as good as possible so I need to focus some extra energy on it. I think I’ll cut my Macheesmo posts down to 4-5 posts per week which still isn’t shabby!

Please don’t leave me! As always, you can subscribe to new updates for free via RSS or via email. 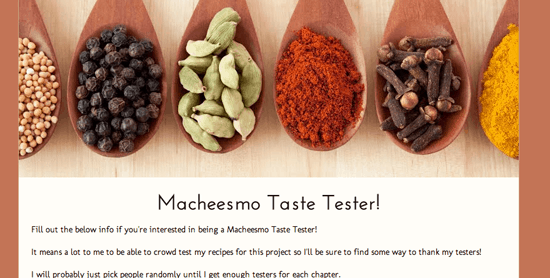 One of the critiques that I got a few times on the first book and that I’ve heard about other cookbooks written by bloggers is that the recipes can be short on perspective.

Sure, all of the recipes worked fine when I made them in my specific kitchen, but that’s a pretty small sample size!

I want to improve this for the new version of this book, so I’m asking for your help!

I’m looking for a group of recipe testers to help me try out some of the recipes I’ve created for the new book. I promise not to over-work you!  You’ll get to pick what chapter you test from and you’ll only be given a few recipes to try out.

I haven’t decided how many testers I’m taking yet, but the more the merrier for now. If you do become a tester, I’ll be sure to figure out a fun way to thank you for the help!

Update: In just a few hours, I had over 200 people fill out the taste tester form so I turned it off! I’m not sure what to do with that many testers but I’ll figure it out! Thanks everyone for being so responsive!

If everything goes according to plan, the new version of the book will be out in early 2014!

I’m really excited to make this book even better and I hope you’re excited to read it!