At least once a month, I’ll have the following interaction with another human being. I’ll be walking through the store (probably the grocery store) and have one or both kids in tow and a kind (usually 50+ year old person) will come up to me and comment how NICE it is that I’m giving Momma some time off and offer if I need any help.

A few things here. First, how dare you imply I don’t know how to navigate the grocery store! That’s my world! I know the aisles of all my local stores better than I know the actual streets surrounding my house.

Second, and the real crux here, is how much parenting has evolved in the last few decades. It’s absolutely true that for my parent’s generation, if my dad had both kids, he was probably giving my mom a “break” because it was implied that she was the childcare provider.

Of course, every family has their own ebb and flow, but most of the families I know with kids do not function in a Dad-works and Mom-cares mentality. Dad is also expected to do childcare and Mom is probably working!

To me, being a dad is so much more than just providing for my family and I really get the feeling that the role of the Dad has evolved in the last decade or so.

I realize that I can’t speak for every parent out there, but when I think of what I’ve tried to focus on as a Dad, these are the points that stick out to me.

Maybe they will help other Dads out there!

The Modern Dad Must Grow a Parenting Connection

My kids are pretty attached to me. When we were on vacation, I tried to play a game of pickle ball with my step-dad and both kids sat on the other side of the fence and screamed the entire time. They were literally five feet away from me, but NOT CLOSE ENOUGH!

It’s hard to admit, but this connection to my kids wasn’t automatic. I worked at it. One thing that is simply biological is that Moms are more connected to kids than Dads out of the gate. It would be silly to deny this. By the time a Dad gets to meet his baby, the Mom has already been bonding with that baby for somewhere around 280 days! Plus, for many months after birth, Moms have much more on their plate with the kiddo than most Dads. That’s just how it goes.

Moms have their own challenges OBVIOUSLY, but Dads can sometimes feel useless and it’s important to find ways you can connect with your kid as soon as possible even if it seems a bit forced at times.

Here are some things I did early on to try to block off some good time with the kiddos.

The Modern Dad Needs Other Dads

It has been SO important to me to have a group of dads with similar lifestyles and views regarding parenting. I have a pretty tight group of half a dozen or so dads that I talk to regularly about all things Dad.

We will meet for coffees, beers, or just chat via group texts. We plan trips with the kiddos to the zoo where we specifically say Dads only!

It’s a great way to share stories, advice, and build a network of helpers in case you need them.

I do not think that you can do this step via an online forum, although you can do that too. I think you need physical other dads in your life that have similar aged children. I’ve learned so much from the other dads I talk to and I can’t imagine being a good dad today in a bubble.

The Modern Dad Motto is Simple

This is my modern Dad motto in one question: What Can I Do To Help?

I don’t like to give specific advise on what sorts of things dads should contribute with around the house. Personally, I do all the cooking (obvs) and Betsy does laundry and other tidying up that I suck at. But that may not work for your family.

So ask! It’s a simple question but one that actually takes some humility to voice because implicit in the question is the concept that you probably don’t have a full picture of what’s going on!

I have to remind myself to do it and I’m usually surprised by the answer. Sometimes Betsy will have something on her mind that I wasn’t even aware of and by asking, I can take it on and take it off her plate.

By the way, moms can do this too obviously, but I think for some reason dads are less inclined to ask to add things to their chore list!

The Modern Dad Should Do It All

I really think that given the changing economics and cultural aspects of our world, the modern dad needs to be able to do it all so that the modern mom can also do it all. Most families I know these days, both parents work, and that means that both parents need to do everything else as well.

But, even if you are in a family where only one person works, I think the role of a dad in today’s world is changing. And that’s a very good thing.

We have work to do still, but let’s keep it up gentlemen. 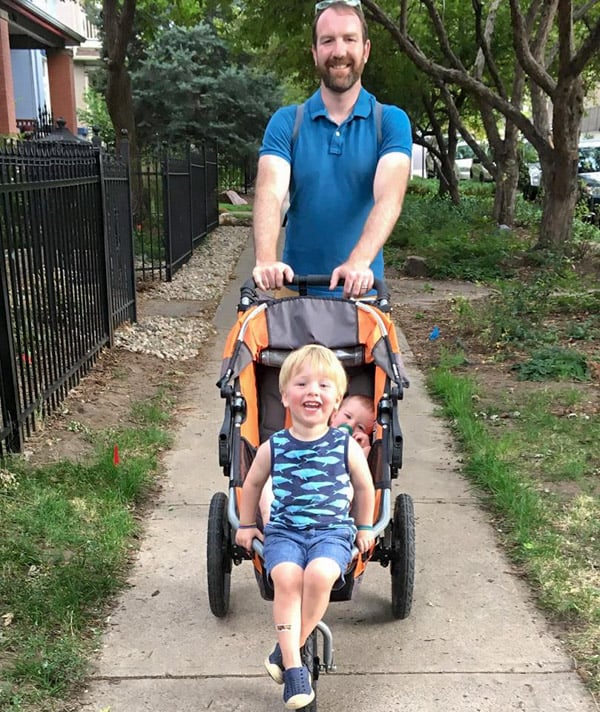 (I love this photo because it seems like I really have it all together and both kids look relatively happy. Literally moments after this was taken, Theo got his leg stuck in the wheel of the stroller, almost broke it, and the scene devolved into chaos. GO ME.)

Do you have a tip for modern dads out there? I know most of my readers are female, so WHAT CAN WE DO? Leave a comment!

12 Responses to “A Modern Dad Manifesto” Leave a comment