Now Reading A Letter to Obama

A Letter to Obama

What’s up man!? It’s been awhile since I’ve written you. I know you are having a kind of hard time over on Pennsylvania Ave. with the health care business and the whole economy deal, but because you took the time to comment on my last letter I thought I would try again.

Luckily, I’m not writing you about any of that hard stuff. I’m sure you have enough people whispering sweet nothings of advice is your ear regarding those very difficult choices. Instead, I want to take a few minutes of your time to discuss a much simpler part of your day: lunch.

Let’s get some facts straight:

Fact #1: America is fat and we need to eat healthier.

Fact #2: A lot of Americans don’t have the financial means to prioritize food and frequently eat the cheapest thing they can get that is filling (fast food) unless they can somehow be convinced that it’s worth the extra cost to eat healthy.

Fact #3: You may be the most influential person in America at this time.

With all of that in mind, I get really confused when I check out a list of your dining places in DC. All of them are basically either really expensive places like Equinox that use great ingredients and serve great food, but are probably out of the price range for most of America or you eat at burger joints in an effort to appeal to those Americans that could never eat at Equinox.

Now this is no knock to either Equinox-type restaurants or cheap burger joints. I like both just like you. But, honestly, most of my meals are neither of these options. Most of my meals are veggie-packed. Salads or healthy sandwiches with whole grains or fruits. I have a feeling based on your chiseled physique that your day-to-day diet is pretty similar.

So why the emphasis on burger joints and upper-class places? At first, I thought it was just the media, but then I realized that it can’t be the media because they cover everything you do. You could eat lunch at absolutely any place outside of the Casa Blanca and be blanketed in media. I don’t think that is it.

Maybe it’s Michelle? Maybe she has expensive taste? Oh wait. She started a garden and in fact seems to be trying to make a solid effort to promote healthy eating. In fact, with all due respect Mr. President, I would say that you are actually counteracting any good she is doing on the healthy eating campaign. 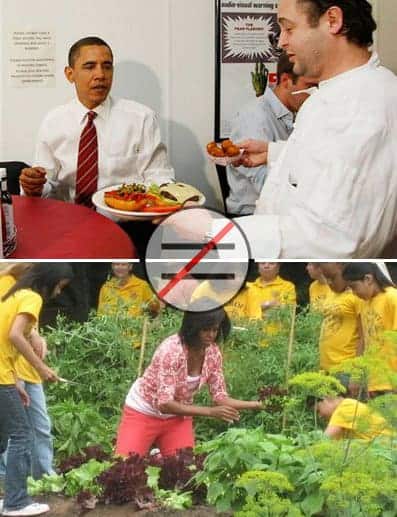 So, as much as I hate to admit it, that just leaves you. Now let me speak frankly. I think this is for publicity only. You are trying (or someone is instructing you) to appeal to the average American so you are going to these places on your “lunch dates.” But that’s the wrong thing to do. People get the impression that these things are what the President eats and so they eat them also.

And so if I may, Mr. President, I’ll present to you the food publicity message I think you should start sending to Americans:

I eat burgers. I eat expensive food. But most meals I eat are based on fresh vegetables, fruits, whole grains, and a touch of meat.

The real reason I’m writing this letter though is because I feel like this is one thing that you can do that would be the easiest change you could make during your Administration. You don’t have to get anything passed by Congress. You don’t have to go through some crazy advisory counsel. All you have to do is go out to eat for a normal, healthy, reasonably priced meal.

Maybe take a stroll through a farmer’s market. Maybe subtly invite some photographers to join you for some Ethnic cuisine? DC does have awesome Ethiopian food which I’m sure you know.

My point is that you have the ability to send a very clear, positive message on diet. Unfortunately, I think you are sort of failing.

I know you have a lot on your plate and if I were you, I would probably want to sneak off and have a big juicy burger and maybe a beer every once in awhile, but just make sure to let people know that that should be the exception and not the standard.

Photos by Lynn Sweet and the AP via Obama Foodorama.

2 Responses to “A Letter to Obama” Leave a comment