Over the years, I’ve tried to share with you all photos from our home as Betsy and I have moved around the country. Our DC home was our first house together and then we moved to Grand Junction, CO in 2010.  We have lived in Denver for almost a month now and I think we can call it home now.

We both love it here already and I also think our current home is our most “grown-up” house we’ve ever lived in. I thought I would share some photos with you all!

When Bets and I moved to Grand Junction, we were able to rent an entire house for about 60% of our two bedroom DC apartment. Now that we are back in the city, we downsized a bit, but were still able to get more space for roughly the same price we paid in DC. DC is just really expensive.

We found a very cute three bedroom condo in downtown Denver that we snapped up as soon as we saw it. We didn’t even visit the place in person before putting a deposit down. We knew we would love it.

Here’s the living room which Betsy decorated as always. Our random wall of photos is rapidly growing which I like. 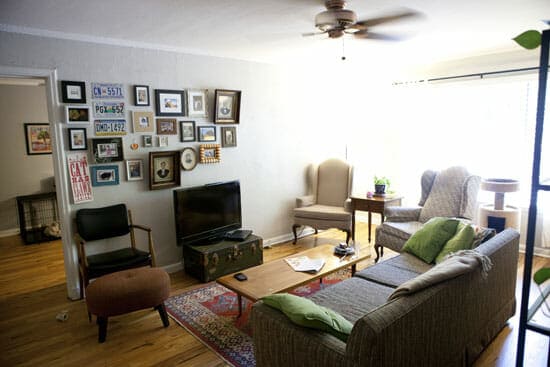 Here’s a close-up of the Tipsy section of the photo wall with one of my favorite photos I’ve taken of her (Cat in a bowl). 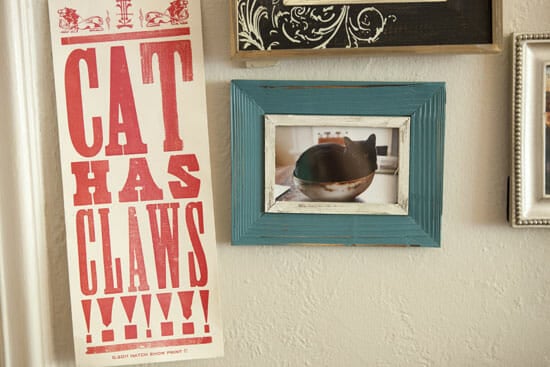 It’s a really big living room actually. Betsy’s mom sent us some of her old furniture which is great because we were able to upgrade from our cheap-o couch and chairs to some real wood stuff (Thanks Mary!). Betsy informed me that I have to tell you all that we are getting the chairs and couch re-upholstered. We do not live in the 1970s. 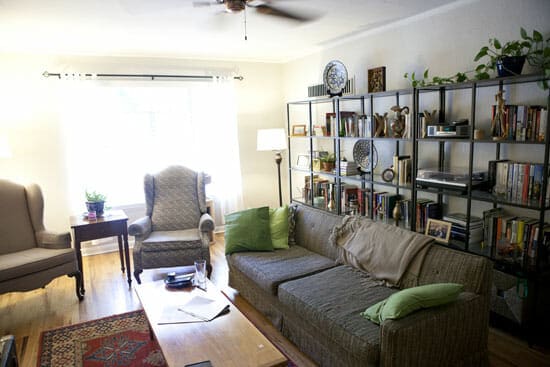 For one entire wall in the living room, we went and got some minimalist metal shelving from Ikea. I’m not going to admit how long it took me to put these together.

Even though the shelving is Ikea, I feel like it doesn’t look like Ikea because Betsy did a great job decorating the shelves and spreading out different stuff on them. We keep a lot of books the shelves, plus our record player and records, and lots of other trinkets. 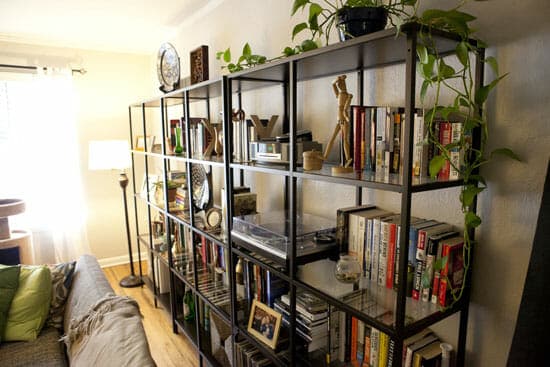 I really messed up in our last home and didn’t spend much time planning out my office. It was kind of thrown together and it just didn’t work well. I didn’t have any storage space and it led to stuff just being tossed around everywhere.

This time around, I spent some time planning out what I needed exactly and, while I ended up with basically an Ikea commercial, it works well for me. 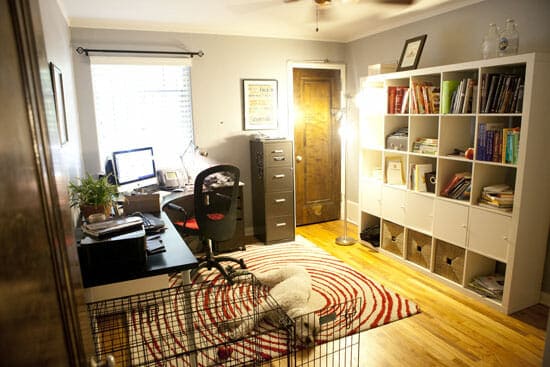 I have a big desk so I can really spread out and lots (LOTS) of storage. Here’s part of my cookbook section which I tried to color coordinate to be all fancy. 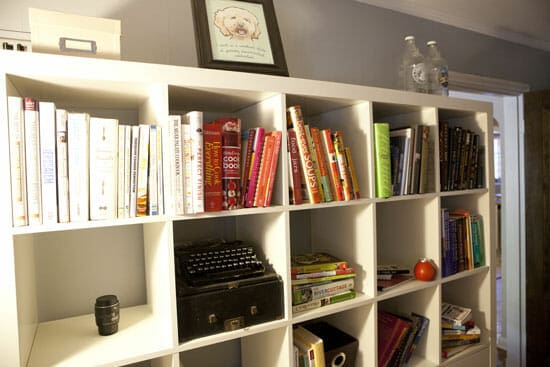 I also made sure I had some extra storage just for photography stuff. I have two whole shelves that are just for plates, linens, and other props. I’m sure I will outgrow it eventually, but it works great for now. 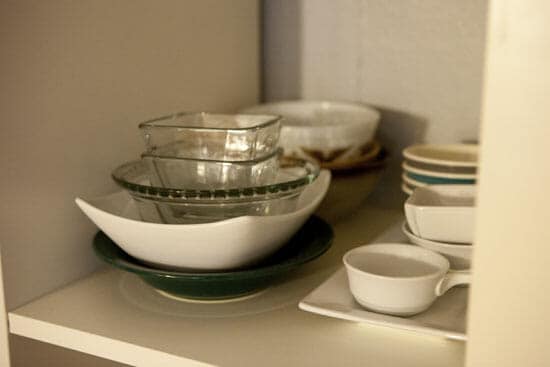 And I stuck my favorite Doodle-related art in my office.

It pretty much sums up his personality perfectly. 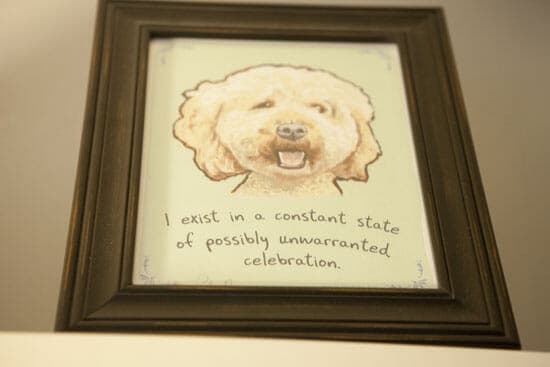 Besides the living room and office, we have a really big dining room. Our little round table looks so tiny in it. This is the room where I take a lot of photography just because it’s close to the kitchen and gets decent light. 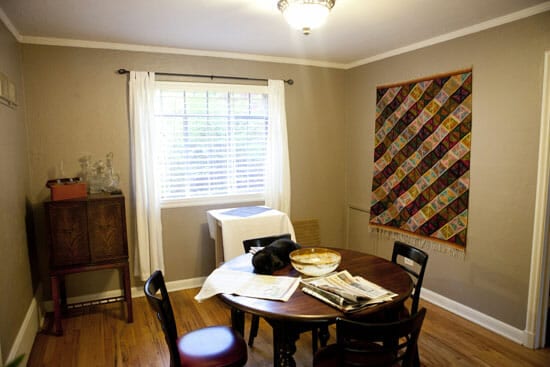 We also have a really nice bedroom that I just love. It’s really spacious and I love the colors. 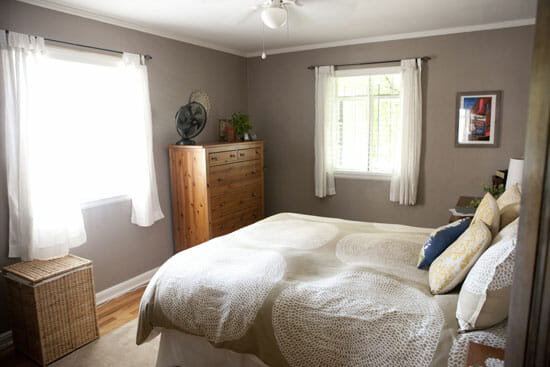 We were lucky enough to score a second bedroom as well which we turned into a guest room. There’s an small attached 1/2 bathroom to this room and we decided it would be better used in the guest room than in our main bedroom. We’ve already had some visitors even! 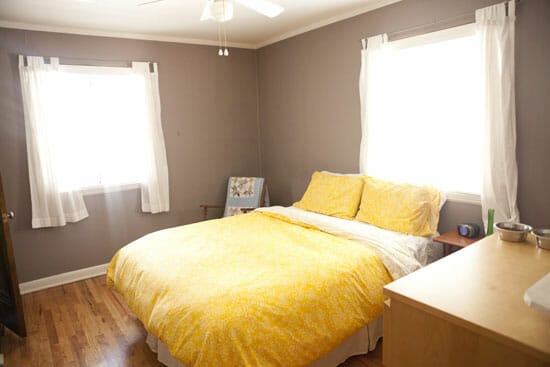 As you might guess, the kitchen is my second office. The interesting thing about our new kitchen is that it’s technically smaller than our last kitchen, but it’s much better laid out. So far it has been much easier to work in and it has really nice storage and shelving.

You might think that that is wallpaper on the designed wall but it’s actually a hand-painted stencil!  I think it looks really nice. 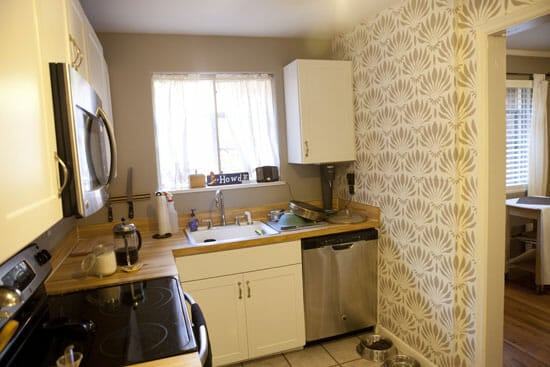 Most importantly for me, there’s a second counter area with shelves for a pantry. I use the crap out of this section of the kitchen and Betsy created an amazing storage system with bins and labels and all kinds of organizational stuff for me. 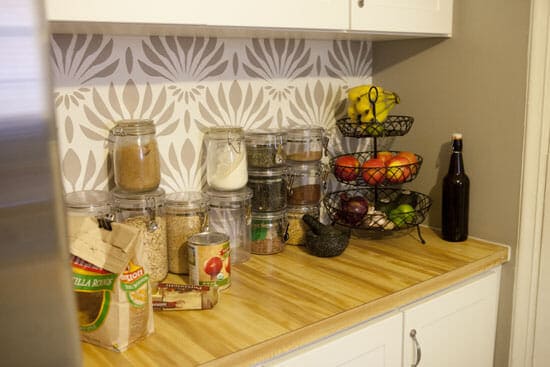 We don’t have a yard in our new place, but we barely had one in our old place. It was more just dirt and weeds and there was no fenced in area for Porter to roam. Our new place has a really cute little courtyard that we share with the other tenants. It’s actually perfect for us. 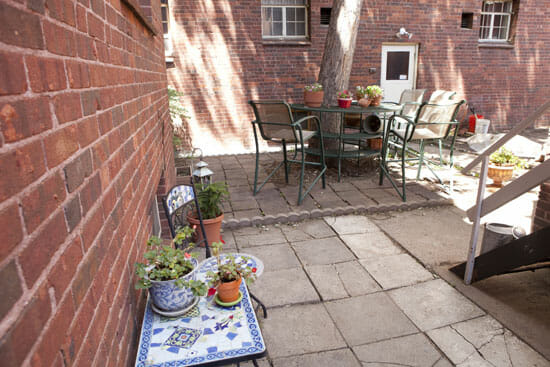 The courtyard has lots of potted flowers and some raised garden beds which is awesome. Plus it’s enclosed so we can let Porter roam outside if we are having a drink outside or something. 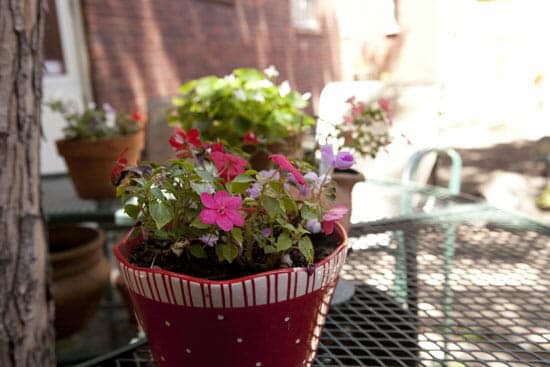 Moving is always stressful on animals. This was Porter’s first move really so he was particularly confused. I think Tipsy knew what was up as soon as we started packing stuff up, but maybe I’m giving her too much credit.

Anyway, they have completely settled in now. Porter has found his new favorite nap spot in my office on my new rug. 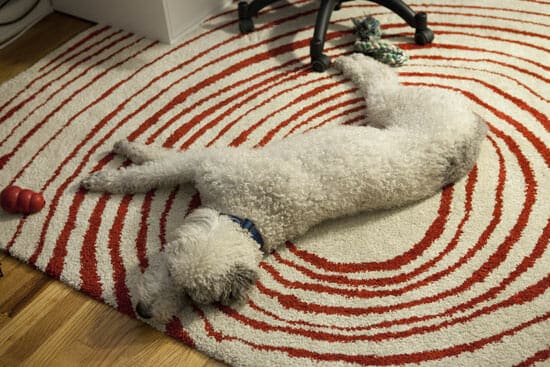 Meanwhile, Tipsy has a few different favorite spots, most of which are elevated so she can keep an eye out for trouble.

On this day she was posted up on the dining table reading the newspaper. 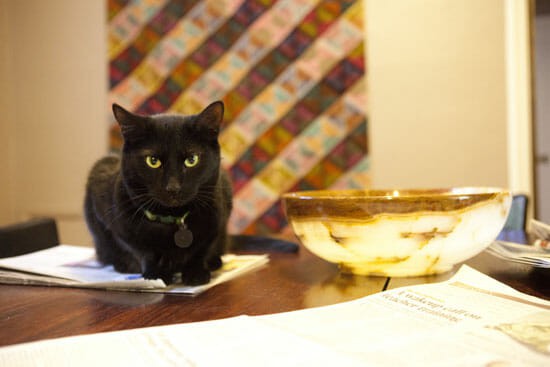 So that’s our home!  We love it so far and it’s great to be back in the bustling city!