Sometimes I have an idea for a dish (in this case a brownie) and I get really excited about it. I talk about it and think about it. Sometimes I remind myself of the cute kid in the Disney commercial. I get so excited I can’t even sleep!

I’ve made brownies before with cream cheese in them, but I wanted to try something different. I’m a huge fan of mascarpone and thought that a mascarpone brownie might be really interesting. That was my great idea. I’m sure it’s been done before. The point is though that I completely botched it. More on that later.

This, however, was the successful version.

Don’t get me wrong, it was edible, but I’ve given a recipe below that I think would make it even better.

Mascarpone Frosting (Giada's version looks like a huge improvement on mine.)

1) Combine the chocolate and butter in a bowl or saucepan and put it on low heat. Use a metal bowl and then set it on some boiling water to melt everything slowly.

2) Once the chocolate and butter is melted, slowly mix in the sugar and eggs until everything is combined well.

3) Slowly add your flour and then spread it all out in a buttered 9 X 9 pan.

4) Whip the cheeses together with the butter until everything is light and airy.

5) Cook the brownies without the mascarpone on them. Bake for 18-20 minutes at 350. Ideally though a toothpick would come out pretty clean from the center.

6) Cool the browning before frosting (sticking them in the oven for 30 minutes would work)!

7) Frost the brownies and enjoy!

I tend to like a really rich, intense brownie. I want it chocolate-filled and dense. I might work on a brownie recipe that is a bit lighter and more cake like, but this one is rich.

To start, combine your chocolate and butter in a bowl or saucepan and put it on low heat. I use a metal bowl and then set it on some boiling water to melt everything slowly. If you are putting it over direct heat, watch it closely and stir it continuously.

Once your chocolate and butter is melted, slowly mix in your sugar and eggs until everything is combined well. Try to make a face!

The original recipe calls for vanilla extract, but I’ve recently discovered almond extract and it has kind of changed my life. I highly recommend trying it out.

Slowly add your flour to the party and then spread it all out in a buttered 9 X 9 pan.

Ok. So on round one for these brownies I tried to make them exactly as I would the cream cheese brownies. So I made a mascarpone mixture and tried to kind of fold it on top of the brownie and bake it. It works very nicely with cream cheese because cream cheese is sturdy and bakes well.

Turns out that mascarpone is closer to butter and ends up just melting all over the place. 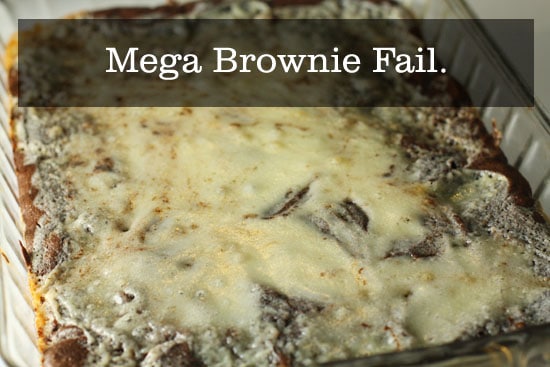 Not to be defeated, I immediately went to the store, bought some more chocolate and gave it a second shot. This time I figured I would just use the mascarpone as a frosting and this was a much better idea.

(Side note that at this point Betsy thinks I’m crazy. I’m cursing at my oven, flinging butter and chocolate all over the place, running to the store and back in the rain… it was really an all-star performance.)

If I were to do it again though, I would use the above recipe which I think would be just about perfect. I used 100% mascarpone for mine and it was still a bit too light. It really needs a touch of cream cheese I think to make it hold together.

In any event, you basically just whip the cheeses together with the butter until everything is light and airy.

Cook the brownies without the mascarpone on them. They will need to bake for 18-20 minutes at 350. I always tend to under-cook my brownies rather than overcook them. Ideally though a toothpick would come out pretty clean from the center.

The key part is to make sure that your brownie is completely cooled before frosting it. Otherwise you’ll just run into the same melting problem. In fact, I even stuck my brownies in the fridge for a few minutes after letting them cool at room temperature for about 30 minutes.

This was a great lesson for me. Do a bit of research before you start and it can go a long way toward success. I got just a bit too excited about my concept (which in retrospect wasn’t so original) and didn’t take the time to think through the whole dish.

But I’ll say a few things:

If anybody has tried something like this before, I’d love to hear from you! Also, if you can think of any improvements, as always, leave a comment!